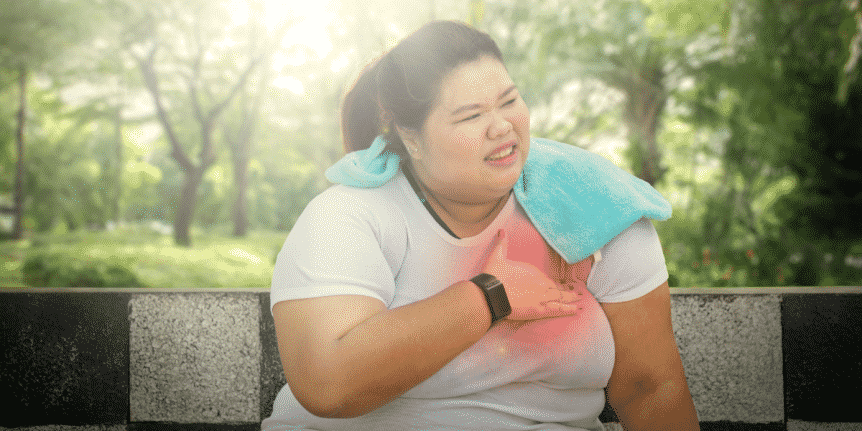 Obesity and atrial fibrillation (AFib) are related, and that is the bad news. The good news is that losing weight and weight loss surgery can improve AFib.

AFib is an abnormal heart rhythm where the heart is not getting the right signals to work properly. That means the heart is not pumping blood as it should. AFib is a type of arrhythmia that can cause a rapid, irregular heartbeat. Blood can pool and clot in the heart, raising the odds of health problems like heart failure, heart attack and stroke. The symptoms of AFib are weakness, shortness of breath and heart palpitations.

According to the Centers for Disease Control (CDC), by 2030, an estimated 12.1 million people in the United States will have AFib. AFib contributes to about 158,00 deaths each year and more than 454,000 hospitalizations. AFib as a primary or contributing cause of death has been on the rise for more than two decades.

The Obesity and Atrial Fibrillation Connection

Obesity and AFib are at epic proportions in the United States. According to Dr. Eoin Donnellan, a fellow in cardiology at the Cleveland Clinic, as many as one in five cases of AFib are related to obesity.

If you are obese, you are twice as likely to have AFib. Extra fat tissue, particularly around the waist, can damage the heart’s man pumping chamber. This damage to the left ventricle prevents it from filling it up as much as it needs.

Obesity directly effects the heart tissue, making AFib more likely. The higher your Body Mass Index (BMI), the more likely you are to have AFib.

A Swedish review of 16 studies found a BMI above 30 increased the lifetime risk of developing AFib by 49%.

Also, when you are obese, you are more likely to have high blood pressure, coronary artery disease, sleep apnea and diabetes. An increase in AFib is linked each of these health issues.

Depending on the severity of AFib, treatment includes medication or surgery. The idea is to set the heart back to its regular rhythm.

Also, studies increasingly show that weight loss can reverse or prevent AFib, sometimes without the use of surgery or medication.

The American Heart Association found that 45% of patients who lost 10% or more of their body weight no longer had AFib symptoms. However, losing and regaining 5% of body weight doubled the likelihood of AFib symptoms.

According to Dr. Vivek Reddy, director of cardiac electrophysiology at the Icahn School of Medicine at Mount Sinai in New York, losing weight has been found to make AFib easier to control.

Also, a study in The American Journal of Cardiology found that people with AFib who lost a little weight and exercised improved their symptoms.

The Benefits of Bariatric Surgery on Atrial Fibrillation

In addition, bariatric surgery before AFib ablation showed reduced recurrence of AFib. Ablation is a procedure to treat AFib that scars or destroys heart tissue to disrupt faulty electrical signals.

At the Surgical Healing Arts Center, our surgeons can talk to you about the many benefits of bariatric surgery. Click here to learn more.